In the early 1990s, the USGA modified the rules of golf to allow clubheads to be produced with a face insert made from a different material than the body of the clubhead. However, to permanently secure a face insert to the face area of a metal clubhead required clubhead designers and their production foundries to conceive and develop new manufacturing procedures. Manufacturing engineering is an area in which Wishon displayed an early depth of understanding. Under his direction, the Dynamic Precision Casting Company was able to be the first foundry to develop a production method to enable it to be possible to permanently secure a non metallic face insert into the body of a metal clubhead through a combined mechanical and adhesive method.

Tom’s Coalition model woods and irons became the first full set of woods and irons designed and manufactured with a separate striking insert installed in the faces. The design also brought about an improvement in ironhead weight distribution for off center hit improvement as well. By removing a portion of the steel from the face of the iron and replacing it with a light but strong polymer face insert, weight became available to be positioned around the perimeter of the clubhead to increase its Moment of Inertia (MOI) and enable specific changes in the heads’ center of gravity (CG) location. By assisting the production foundry in the development of manufacturing methods and machinery to allow the Coalition to be made, the foundry hired Tom as a consultant in materials and manufacturing technology, a relationship which existed between the two parties well into the 2000s.

While golfers are now familiar with the adjustable hosel pieces used on several OEM drivers starting in 2009-2010 to change the lie and face angle by rotating the hosel piece, the first metal woods to offer this concept for customizing were the AHT woods designed by Tom Wishon in 1995. The neck of the AHT woods was designed to accept a precision machined aluminum sleeve into which the shaft was inserted for assembly. The sleeve was machined so that it could be rotated in the neck of the woods to allow a series of different lie and face angle orientations when the shaft was installed.

Wishon’s adjustable hosel design was not just created and offered in a driver, but also in a full set of fairway woods to go with the driver to allow golfers to experience a custom face angle and/or lie angle adjustment in all their woods.

All wishon designed clubhead models starting in 1997 through present day

Clubhead models designed for custom fitting assembly with any shaft or grip are far better for clubmakers to build to the desired swingweight if there is a way to add weight internally within the clubhead. Prior to 1997, all clubheads that were made with a weight addition capability utilized an unsightly screw to allow access to a chamber for adding lead powder. In 1997, Tom Wishon designed the ‘hosel weight bore’ which was located at the bottom of the shafting bore in the neck (hosel) of the clubhead to allow clubmakers to add a series of weight plugs of different mass to enable them to achieve desired swingweights with their assembled clubs. The weights could be epoxied into the weight bore before the shaft was installed. Thus not only did the shaft lock the weight in place, but the weight addition was invisible and did not detract from the appearance of the clubhead.

In 2006, Wishon began to design specific clubheads for his company with a 2nd weight bore, most typically located on the toe side of the sole of woodheads and hybrid heads, or on the center back of iron heads, so as to allow clubmakers the ability to add up to as much as 18 grams to a clubhead to achieve very specific custom swingweighting specifications when necessary for a golfer.

The very playable concept of a super heavy sole attached to a high loft fairway woodhead first became commercially successful in the 1970s with the popularity of wooden clubs like the Stan Thompson Ginty and the Cobra Baffler. However, no company or designer had ever converted the heavy sole design concept to a metal wood, let alone on a driver head.

Because drivers are so much larger than fairway woods, this size difference did not allow a significant amount of additional mass to be positioned on the sole. In addition, nearly 100% of the premium metal fairway wood sales were in woods cast from stainless steel. With steel being very high in density, this did not allow much mass to be located in the sole to lower the CG. Because Titanium has a 40% lower density than steel, it could be possible to make a titanium woodhead with a heavier mass attached to the sole.

However, in 1997 titanium was limited chiefly to driver sales because of its much higher cost. The golf industry believed that golfers would not yet spend the same amount for titanium fairway woods so no companies had yet begun to develop Ti fairway woods, with or without a heavier sole design. The Super Track woods became the first full set of driver and fairway woods, all designed with a heavy sole to lower the CG and offer better performance for shots hit from tall grass. Rather than use screws to attach the stainless steel sole piece to the light aluminum top shell which could potentially come loose with use, Tom chose to design the Super Track by inserting the investment cast steel sole piece into the forging dies for the 7005-T6 aluminum body so the heavy sole could be press fit together in one operation with the head body. The result was the first set of metal woods from driver to fairway trouble woods with a heavy sole that had a very low CG and were extremely easy for golfers to hit.

At this time, a few golf equipment companies were beginning to use high density tungsten metal on the sole area of clubheads to lower the center of gravity (CG) for the purpose of increasing the launch angle and height of the shot. Wishon recognized there was no need to lower the CG on high lofted fairway woods or the higher loft irons in a set. The much greater loft angles of these heads generated a high enough trajectory for the majority of golfers. To continue to put tungsten low on the head for all heads in the set meant the higher loft woods and irons would hit the ball too high and potentially reduce distance.

In each of the above listed set designs, Tom restricted the use of the tungsten to only the heads in the set in which the lowering of the CG would be advantageous to the launch angle of the shot. In addition, the tungsten was placed more toward the heel on the long irons to also shift the CG closer to the shaft, creating a draw-bias effect to reduce the golfer’s tendency to fade or slice the ball. Thus for the first time in the golf industry, each ironhead in these sets utilized its tungsten weighting for a specific function unique to the loft and length of the club. In the Lynx Black Cat woods, the tungsten sole weight piece was placed closer farther from the face in the driver to enhance the launch angle from the lowest lofted woodhead, but progressively moved closer to the face for the matching #3, 5 and 7-woodheads to prevent hitting the ball too high as loft increased through the wood set. 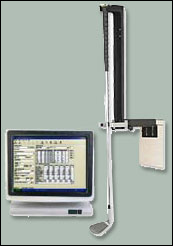 Engineers with a working knowledge of golf clubs have long known that matching all clubs in the set to their assembled Moment of Inertia (MOI) is superior to matching all clubs to each other by swingweight. By building all clubs in a golfer’s set to have the same MOI, each club will swing with exactly the same feel and effort from the golfer. Swingweight matching cannot do that, so the golfer has to use a different effort to swing each club. MOI matching is truly a custom fitting parameter because each golfer has a different combination of strength, athletic ability, swing tempo and point of wrist-cock release on the downswing.

MOI matched clubs must be individually fit to each golfer so that the benefit of more consistent on-center hits will be achieved by each golfer. Real MOI matching has never been pursued by any OEM because their business model is to make standard made golf clubs with the same specifications, including the same swingweight. In developing the golf industry’s first MOI Matching System, TWGT enabled professional custom clubmakers to offer golfers a more superior method of matching swing feel and improving their on-center hit consistency.