In the game, there are junior golfers and there are junior golfers. If kid is ten years of age or younger and just beginning to learn how to hit the ball and is average to a little small for their age, they are a junior golfer and should be started with a junior set of clubs. By that I mean the partial sets of clubs with smaller heads with much more loft, the most flexible junior shafts and junior size grips which are sold by a number of component companies as junior components.
But if the junior is ten or older, has been playing enough to have developed the ability to get the ball airborne most of the time, shows enough of an interest to stay with the game and is of average to bigger than average for their height for their age, they are a junior golfer. In other words, fitting knows no gender or “age group” in the club specifications; fitting only knows that golfers are shorter or taller, weaker or stronger, athletically inclined or less so. Another example. I am sure you have seen adult women who are 4”10” tall, weigh 90 lbs soaking wet and are not that strong or athletically inclined. Would such a golfer be fit into junior clubs? Typically such a golfer would be fit into clubs which the industry likes to call petite ladies clubs which would be shorter, lighter, more flexible, etc., etc.
My point is there are times when real junior clubs are appropriate for the young person and there are times when “adult clubs” built to be shorter, lighter, and more flexible are more appropriate for the junior golfer. When you see juniors who have a real interest in the game and have developed some semblance of skills to get the ball airborne the majority of the time, fit them as if they are a smaller adult with less physical strength.

For the kids who are just beginning to learn the game, everything possible should be done with the clubs to help them make solid contact and get the ball airborne as soon as possible after learning the basics of the swing. In that sense, the common sense fitting parameters which are most important for clubmakers to pursue are:

• Loft is a definite “A” effect specification for junior fitting

Choose wood and ironheads with lofts which are weaker than adult clubheads. The smaller and lighter the junior golfer, the more loft should be on the woods. For example, driver loft to be 15 degrees minimum. And in the irons, bending the irons to have more loft is much more important than to worry about whether they’ll hit their 7-iron as far as they should. At this stage in a junior’s playing life, golf is all about getting the ball up and hitting it solid the highest percentage of the time so they will like the game and keep working at it. Remember, all kids who play sports know that a ball in the air is better than a ball rolling on the ground.

• Length is a definite “A” effect specification for junior fitting.

The longer the club length, the more difficult the clubs will be for juniors who are smaller and lighter in weight to be able to control in the swing and hit the ball in the air more often. I’ve provided a chart A-19 in this section which outlines basic length recommendations for beginning junior players.

The heavier the clubs, the harder they will be for the junior player to swing with a semblance of control to be able to hit the ball solid and well up in the air a high percentage of the time. Because of the much shorter length requirements of junior golfers, clubmakers will build to a total weight instead of a swingweight. Shorter lengths make it impossible to use a 14” fulcrum length swingweight scale. Hence when building to a specific total weight requirement, all weight addition needed will be added to the clubhead. To help in the total weight fitting for the junior, when it is financially possible, graphite shafts should be used to keep the total weights lighter. Some component companies do offer junior graphite shafts which are both more flexible than the junior steel shafts available, and are not that expensive.

• Set Makeup is a definite “A” effect specification for junior fitting

Follow the same rule for fitting set makeup for juniors as for adults–fairway woods with higher lofts and no conventional iron longer than a 5-iron. In other words, until the junior golfer has displayed a definite ability to get the ball well up in the air almost all the time, no wood should have a loft less than 15-16 degrees and no iron should have a loft lower than 28-30 degrees. Whenever possible, build a separate SW to the PW in the junior set so the young player can learn as many short game shots and skills as soon as possible.

• Lie Angle in the irons and wedges is a definite “A” effect specification for junior fitting
While junior golfers may not hit the ball far enough with the irons to experience much of an off-line shot from improperly fit lie angles in the irons as adults, fitting lie in the irons is important to help the sole move more cleanly through the shot. Unfortunately, many of the junior ironheads offered by the component companies are made from zinc because these companies simply want to offer a low cost junior clubhead. Zinc irons cannot be bent. Whenever possible, look for stainless steel junior ironheads so you can bend the lie angle to fit the young player. And if necessary, it is always better to choose an adult ironhead and bend that to the proper lie and loft than to select a zinc ironhead. As a bending guideline for juniors, skip the dynamic lie board test and focus on bending the irons so they all sit flat on the center of the sole in the address position.

• Shaft Flex is a definite “B” effect specification for junior fitting
Yes, more flexible shafts are better for fitting juniors. But no shaft, no matter how flexible is going to make the difference between getting the ball well up in the air or not. That’s the job of the swing, the loft and the length being comfortable for the golfer to swing. Still, it is much better to fit the junior into a more flexible shaft for the simple reason they will learn the feeling of a solid impact much better than if the clubs have a stiffer shaft. Loft, length, total weight and set makeup are far more important for directly assisting the junior to get the ball well up in the air and hit the shot solid. 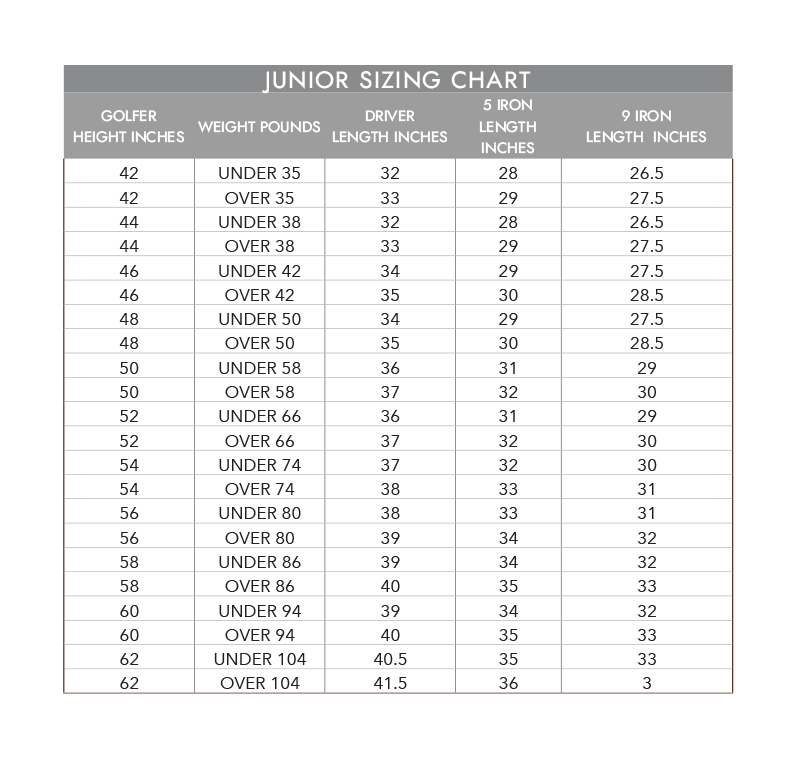