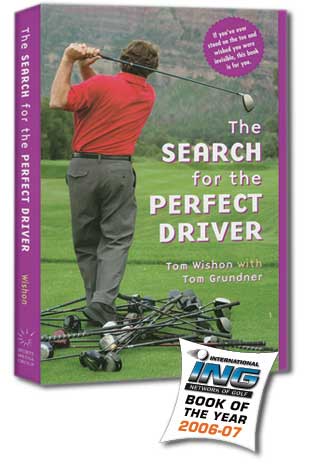 THE SEARCH FOR THE PERFECT DRIVER


By Tom Wishon, with Tom Grundner

The latest in the Search series of truths about golf equipment performance is The Search for the Perfect Driver. Devoted expressly to the driver, the Search Driver book contains information to ensure that both average and advanced golfers know how to choose the best driver for their swing. Released in October 2006, the Search Driver book is allowing golfers of all abilities to make much better decisions about choosing the best driver to be able to increase distance, improve accuracy and consistency off the tee.

Read An Excerpt from Chapter 1

From Chapter 1 – A Head Start

All right, I am a perfect example of what you’re talking about in your introduction. I’ve never been completely happy with my driver, and I know next to nothing about golf clubs. What do I do now?

That means the problem is either in your club, or in your swing or both—meaning they don’t match well with each other. The concept of a properly fitted driver, or any club for that matter, is that the club is made to fit your swing, not that you change your swing to be able to swing the club.

Wait a minute. I am not going to blame my club. It’s a big-name popular driver, and a lot of golfers use the same one. How could that be the source of the problem?

I am well aware of the popularity of some of the heavily marketed standard-made drivers that are bought off the racks in retail pro shops and golf stores. The question I am raising is: what did you buy?

If I ever decide to get out of the golf business, I think I am going to open up a running shoe store based on the same business model as a retail golf store that sells the heavily marketed, brand-name golf clubls. I will have hundreds of shoes to choose from, but all of them will be the same size—9 1/2 for men, which is about their national average shoe size. If your foot happens to be a 9 1/2 or your wife’s a 7 1/2, all well and good. If it doesn’t, wear them anyway. After all, it’s not the shoe; it’s the runner, right?

When you buy a driver off the rack, you are buying a club that has been designed and assembled to some kind of national average—or worse, made to what the marketing mavens believe the majority of you and your golf friends will be receptive to. When you put on a pair of shoes, you can immediately tell if they don’t fit. With a driver, or any other golf club for that matter, most people can’t. They hit a high percentage of bad tee shots and automatically assume it’s their swing that’s the cause. With shoes you’ve learned over a lifetime what to look for and look out for. Most golfers can’t even begin to do that with their clubs.

Ok, where do we start?

Let’s start with some terminology. That way, as we talk about this stuff later, we’ll have a common framework of understanding. And if you happen to know all this terminology stuff, don’t boot me out yet; there’s a whole lot more to come that I bet you don’t know about drivers. So, bear with me here for a second as we begin the journey to find your perfect driver.

Every driver head has three basic parts: the hosel(pronounced HAW-zul), the face and the body. The hosel is the neck of the clubhead. It’s where the shaft goes in. (Yes, I know, several Callaway brand drivers don’t have a hosel, but let’s not worry about the few exceptions for right now.) The face is the surface that strikes the golf ball, and everything esle is called the body.

The body is further divided into the heel (the end closest to the hosel), the toe (the end farthest from the hosel), the sole(the bottom of the head), the skirt (the part that curves all around the sides of the head), and the crown (the top of the head). On most heads you’ll see a little plastic ring at the top of the hosel. That’s called a ferrule (FAIR-ul). but it has no real function except as a decoration. No, it won’t keep your graphite shaft from breaking. It’s just a decorative piece that connects the appearance of the hosel smoothly to the surface of the shaft… 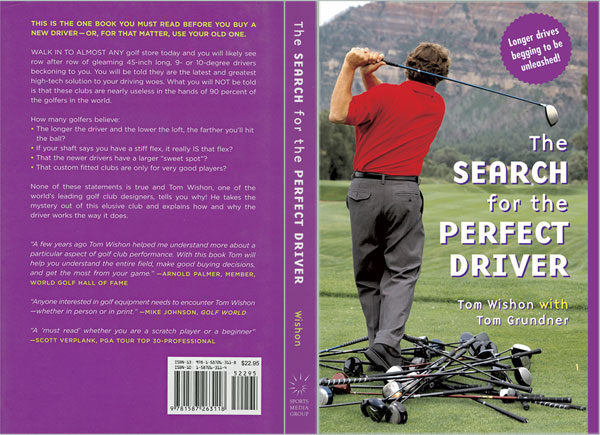 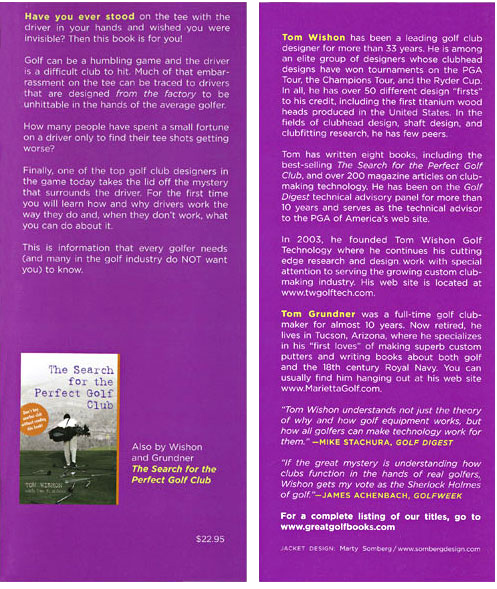 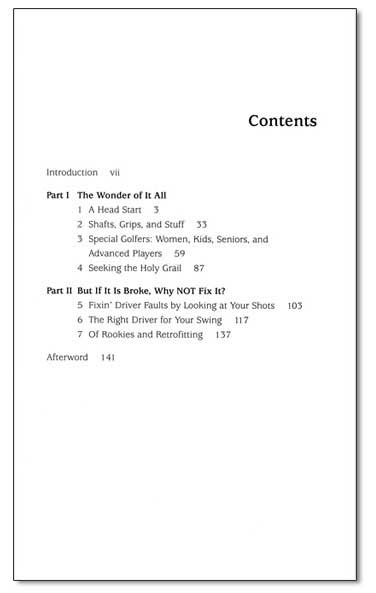