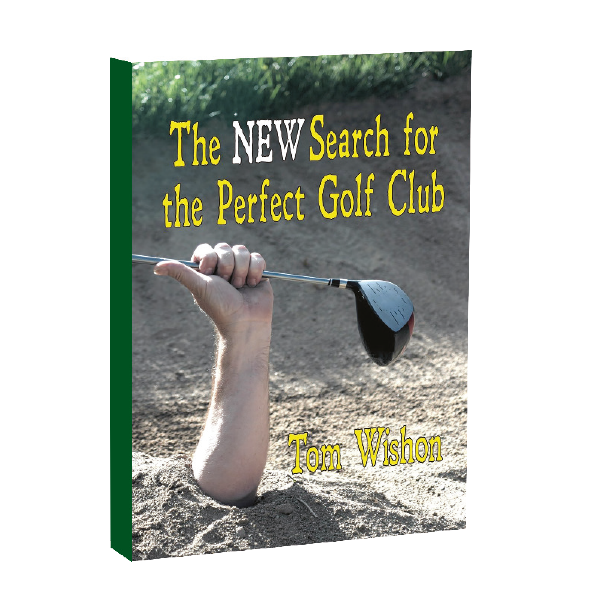 THE NEW SEARCH FOR THE PERFECT GOLF CLUB


By Tom Wishon, with Tom Grundner

Look what Tom’s done for you lately… He wrote a book. Not just any book, but one that emphasizes what you have to offer the millions of golfers currently buying OEM clubs that don’t fit them, and won’t help them play to the best of their ability.

Read An Excerpt from Chapter 1

The loft, lie and lengths of your clubs all interact with one another and your swing speed to give you the direction, distance and trajectory of your ball flight. In terms of accuracy, the most important of these three is club length, followed by lie and loft. Let’s look particularly at length.

Length and accuracy is a no brainer. Think about it. If I put a club head at the end of a 10 inch shaft and ask you hit a golf ball straight down the fairway, it would be a pretty easy task. OK, so you’d only get to put one hand on the club, you’d be on your knees to address the ball, and the ball wouldn’t go very far. But, it would be easy to make solid contact and to hit the ball straight. Now, let’s say I switch you from a 10 inch to a 10 foot club and ask you to do the same thing. What do you think’s going to happen?

Right. The 10 foot long club would be almost completely uncontrollable.

I remember when long drive competitions had just started, and golfers were in awe of the humongous long drivers these gorillas used. All of a sudden there was so much interest among regular golfers in super-long drivers that many shaft companies began to manufacture specially designed super-long shafts to meet the demand.

One day I built a 60″ long driver with a graphite shaft finished in a bright fire engine red. My wife Mary-Ellen happened to work with LPGA Tour player Tammie Green’s brother at the time. We were headed out for a picnic at the Green family farm outside the quaint little town of Somerset, Ohio that weekend. I knew Tod would just love to get his hands on that club, what with all the talk at the time in golf about super long drivers, so I shoehorned all 60 inches of it into the car.

The 9-hole golf course where all the Greens learned to play bordered the family’s farmland so as soon as I pulled this 60″ driver out of the car, Tod and Tammie got this gleam in their eyes and said, “let’s go over to the club.” In a flash the three of us hopped on the family John Deere, headed out across the fields and over to the Perry County ‘Country Club’. Some vehicle to head into a golf course parking lot with, eh!

As soon as we rolled in, Tod hopped off the tractor, took the 60 inch driver and strolled into the “clubhouse.” Conspicuously waggling the driver in front of him, Tod hollered out, “Tammie’n me got us a new driver here and we’re a’wonderin’ if any of you boys want to give it a whack.” Sure enough, the “boys” all jumped up and insisted on heading outside the front door to the 1st tee to try it out. Once there Tod posed a little proposition–you know, a group of guys hanging out drinkin’ beers in the shop can’t possibly do anything golf-related without “putting something on it”!

Tod said, “OK, you guys give me a buck for each swing you take with this driver and I’ll give you two bucks if you hit it over the ditch out there in the fairway.” I took a look and figured the ditch that crossed the first fairway was out there about 210 yards, and probably a hazard most of these guys feared with their “mini-drivers.” With visions of massive drives from this 60″ driver, tongues were hanging out and hands were reaching into back pockets before Tod could finish uttering the challenge. Of course, Tod’s “shill” was sister Tammie. After several of the “boys” paid the buck and topped, heeled, or dropkicked the driver, Tammie would step in and say, “Tod, you sure there ain’t nothing wrong with that driver that’s causin’ the boys to hit it so short”? At which point Tod promptly handed the club to his tour player sister Tammie who blew the ball WELL over the ditch on the fly.

Well that just stirred things up even more with the boys of Perry County C.C. To make a long story short, Tod and Tammie walked away with over $100 that day! And the guys all left with a lesson about long drivers, on-center hits and accuracy. The most heard phrase that day? “Gimme that damn thing again, I know I can fly the ditch.” So Tod, Tammie and I all headed to the Somerset butcher shop and grilled steak at the picnic instead of burgers and dogs!

What all this means is this. Somewhere between 10 inches and 10 feet is the correct length for a golf club to hit the ball solid with distance and accuracy. But, I’ll guarantee the right length for you is far closer to 10 inches than 10 feet! Do NOT assume that the “standard” length found on the clubs in the golf shop, especially the woods, will be right for you. 98% of the men’s drivers these days are built to a “standard” length of 45 or 45.5 inches; and I am here to tell you that a 45 inch driver will not fit 90% of all golfers and will never allow them to achieve their best combination of distance AND accuracy.

Let me put it another way. Tiger Woods has swung a 43.5 inch driver most of his career on tour. If he could hit the ball straight with a 45 inch club–he would. He can’t; so he doesn’t. And he knows if he did use a longer driver, he’d have even more trouble keeping it in play. The average driver length for all the other pros on the PGA Tour today is 44.5 inches. Now if Tiger and the rest of his pals know they can’t control a 45 inch long stick, what are the chances that you can? 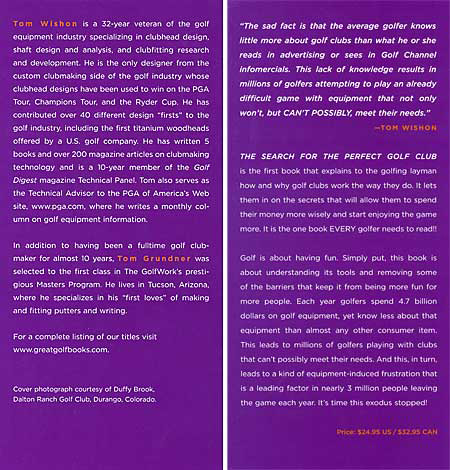 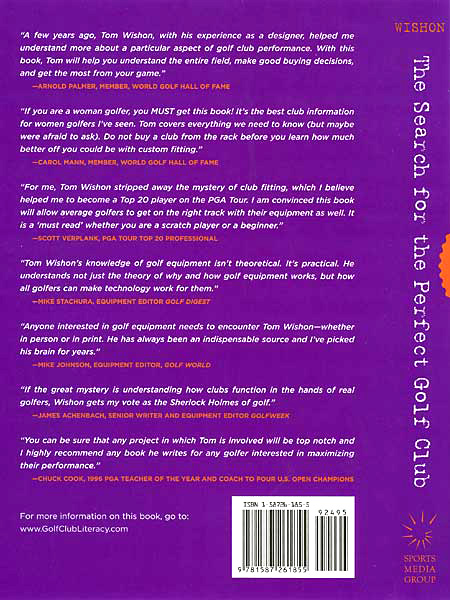 “A few years ago, Tom Wishon, with his experience as a designer, helped me understand more about a particular aspect of golf club performance. With this book, Tom will help you understand the entire field, make good buying decisions and get the most from your game.”

“If you are a woman golfer, you MUST get this book! It’s the best club information for women golfers I’ve seen. Tom covers everything we need to know (but maybe were afraid to ask). Do not buy a club from the rack before you learn how much better off you could be with custom fitting.”

“In the course of my career I don’t know how many pro-am rounds I have played. In all those rounds, rarely have I seen amateurs with clubs that genuinely fit their game. For me, Tom Wishon stripped away the mystery of club fitting, which I believe helped me to become a Top 20 player on the PGA Tour.“I am convinced this book will allow average golfers to get on the right track with their equipment as well. It is a ‘must read’ whether you are a scratch player or a beginner.”

“Tom Wishon’s knowledge of golf equipment isn’t theoretical. It’s practical. He understands not just the theory of why and how golf equipment works, but how all golfers can make technology work for them.” Even more importantly, he makes that knowledge easily understood whether you’re a Ph.D. in mechanical engineering or a CPA trying to break 90.”

“Anyone interested in golf equipment needs to encounter Tom Wishon—whether in person or in print. His passion for sharing his knowledge of the equipment we play with borders on the maniacal, yet he always provides clearly mapped out answers to the most complex equipment questions. Tom has always been an indispensable source and I’ve picked his brain for years. What’s left of it is in inside these pages.”

“I have written about golf equipment and golf technology for a very long time. I can assure you than nobody in the game today knows more about golf clubs than Tom Wishon. Furthermore, he has a passion for golf that is really fun to behold. If the great mystery is understanding how clubs function in the hands of real golfers, Wishon gets my vote as the Sherlock Holmes of golf.”

“You can be sure that any project in which Tom is involved will be top notch and I highly recommend any book he writes for any golfer interested in maximizing their performance.”

“I told one of my brothers to buy [this] book a few weeks ago. I called him yesterday to touch base and asked how he liked the book. He said ‘I don’t know.’ It turns out his wife started reading it and won’t give it to him until she is done with it! My brother said she has never had the slightest interest in a golf book before.”
– Ed   California

“THANK YOU… for reigniting [my] passion for golf and club making THE RIGHT WAY by writing your book. I had forgotten that I need to have my irons 2 degrees flat and now I know that the shafts in my irons and even in my new woods are probably too stiff and the 9.5 degree driver is not enough loft and at 45” is one inch too long. I rushed out to a local golf shop and had the irons bent correctly since I sold my loft and lie machine when I moved here. I have now found my radar gun (95 mph with driver, 75 with 5 iron), my grip jigs, and swingweight scale and when I finish this letter, I am going to the range to work on my game. The passion is back. Again, THANK YOU!”

“Just about anyone who reads this HAS to be convinced that he’s been doing things all wrong all these years…getting fitted is a no-brainer. At least that’s the conclusion I would come to if I had never been exposed to an explanation of the ‘facts’ before.“While there is valuable, and clearly explained info in every chapter, I was particularly drawn to those on fitting the Ladies, Seniors, and that terrific Chapter 12 for those of us who are not up to speed with the latest technological gizmos. Of course, the real value is a better informed customer who can, at least, give you his basic requirements…or who knows that they exist when he first comes in.”

“Tom, as I mentioned earlier I decided to give FREE copies of your book to a select group of customers as a way to say ‘Thank You’ for your business. It will also educate them and help them to sell my products.“I have a lot more to give out, but here is an interim report: It works. Giving away the book is as good as you can get for advertising and it’s a cheap way to get our message out. So far I’ve given away nearly a dozen books. I gave away 4 of them Thursday and Friday of last week so they haven’t had time to work yet, but the others have produced in either direct sales or indirect sales close to $3,000 so far.“One of my good customers who buys the latest and greatest on a monthly basis from everybody in town, but has refused to get fitted or buy fitted product or show an interest in anything other then OEMs, got fitted last week and bought a set of irons. He even helped me with the set make-up while quoting the book about long irons to show me he read it.”